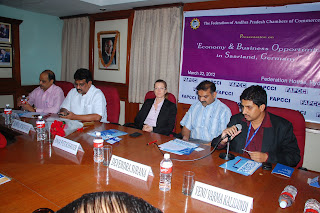 Ms. Anja Petschauer invites the investments to Saarland, Germany to invest in Automobile, Biotechnology, Nanotechnology and IT sectors. Saarland is small but quick – that’s how Saarland sees itself as a place to do business. With its small size and lean management, the state delivers quick decisions to investors. The cost of labor in Saarland is also small, averaging 7.5% less than elsewhere in western Germany.

Saarland is the third-largest automotive location in Germany. Due to its geographical and historical position in Europe at the interface between the two biggest European economies – Germany and France – Saarland offers a high level of expertise in the areas of logistics, the automotive sector, IT, biotechnology, and nanotechnology. 75% of the automotive production in Europe is concentrated within a 500 km radius of Saarland. Other important branches of industry are mechanical engineering, metal-working, the food sector and fine ceramics, tile and porcelain, energy, coal, iron and steel. Many international companies have their production sites and logistics centers in Saarland – a great potential for finding partnerships, customers and synergies in the immediate proximity. The GDP of Saarland grew by 4.7% in 2010. The central location in one of the most stable economic regions in the world makes it one of the most intriguing locations for companies in all sectors.

Mr. Devendra Surana said that the Germany is India’s biggest trading partner in Europe and the 5th biggest trading partner in the world. Germany is also India’s second largest technology partner. India was amongst the first countries to recognize Federal Republic of Germany (FRG) after the Second World War. There has been a rapid growth in trade and economics with bilateral trade reaching Euro 15.44 billion in 2010. In 2011-12, India and Germany are both non-permanent members in the UNSC, which provides a new area for cooperation. Indo-German cooperation in the field of trade and economics is led by the Joint Commission on Industrial and Economic Cooperation. In addition, there are seven Joint Working Groups, namely, on agriculture, automobile, infrastructure, energy, coal, tourism and vocational education.