The industry representatives stated that the Power problems have affected the industry quite adversely and the S.S.I. units are the worst affected ones.

At the instance of the Minister for industry, the Principal Secretary, Energy informed the Associations that there is no way to augment power supply as the corridor between North/East/West Regions and Southern Region is limited and out of 1400 MW booked by TRANSCO Andhra Pradesh received highest allotment of 750 MW. Tamilnadu and Karnataka exercised section 11 of Electricity Act and stopped the Private Power Producers (PPPs) from supplying power to A.P.TRANSCO. Hence, TRANSCO could not buy additional power from these PPPs. The only alternative was to rely on gas-based PPPs, located in the State, but their capacity is underutilized as RIL gas is not being supplied to them at the requisite quantity.

But he suggested that these plants can increase their power generation if RLN Gas is supplied to them. But the industry did not favorably respond to this suggestion earlier and only few industries opted to buy power from this source. The response was only to the extent of only 125 MW. The Principal Secretary said unless 500 MW capacity is pooled up and order is placed on gas PPPs, it is not possible to augment the power availability. 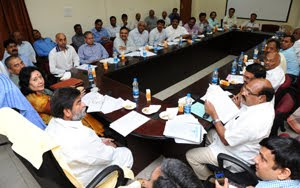 In response, FAPCCI suggested that as the situation ultimately boils down to power shortage, it is better that government buys RLNG and gets the 500 MW power generated by gas based PPPs and out of it 100 MW is reserved and supplied to SSI units at normal tariff and the balance 400 MW may be supplied to large units as well as to continuous process industries who can afford this power at higher cost without cross subsidy. With this alternative solution the problem of industry would get solved to a great extent. With this alternative all that the government has to do is to agree is to absorb a small cost of expensive power supplied to SSI units at normal tariff as the large industry will any pay actual cost of power at reasonable higher rate.

FAPCCI also suggested that VAT set off should be given to industry for its diesel purchases for power generation. Further, the Govt. also should remove 25 paise electricity duty. With these two, the power generation will get augmented and there will be some relief on the TRANSCO power grid and the SSIs will thus get some additional relief.

The Minister stated that she will discuss these issues and suggestions with the Chief Minister and see some kind of relief is given to SSIs and to the overall industry as well.