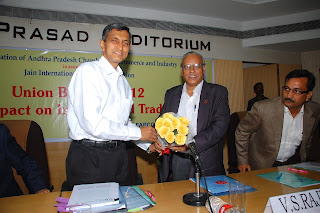 FAPCCI in association with Jain International Trade Organization (JITO) organized a meeting on “Union Budget – 2012 – Impact on Industry and Trade” on March 17, 2012 at 10.00am at FAPCCI.

Sri V.S.Raju, President – FAPCCI in his welcome address expressed that the Union Budget presented by Finance Minister falls short of expectations from the Industry and common man. Industry expected a major push to the growth stimulus to the investment. Though measures like Rs. 60,000 crores tax free bonds for infrastructure is a good measure but these bonds have to be subscribed by the banks, corporate and retail investors – Will they have surpluses to invest is a question? 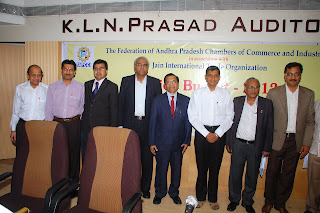 Dr. Jayaprakash Narayan, President, Lok Satta Party in his key note address stated that India is the lowest tax incidence in GDP when compare to Global. The emphasis on Health, Energy, Coal and Infrastructure is a welcome measure. The concept of Taxing Services based on negative list leads to transparency, broadly the indirect taxes direction is good. He further informed that poor remains poor, economy shall not grow, for eradication of the poverty, the four sectors should be strengthened i.e., agriculture, health, education, job and skill up gradation.

Sri T. S. Ajai, Chartered Accountant has explained the amendments to the sec 9 of the IT Act with retrospective effect to bring under the tax net, all overseas transactions involving domestic firms. GAAR is the other big-ticket measure that will come into effect in 2012-13 ahead of DTC. The objective is to counter aggressive tax avoidance schemes, “while ensuring that it is used only in appropriate cases, by enabling a review by a GAAR panel.” The scheme is relevant in the backdrop of the Vodafone tax case, in which the income tax department recently lost a case on a tax demand of Rs 11,000 crore on the UK telecom company after it acquired Hutchison’s stake in what was Hutchison Essar.

Sri Abhay Kumar Jain , Chairman – Direct Taxes Committee stated that our Pre Budget Memorandum pointed out that General Anti Avoidance Rule (GAAR) provisions should not be introduced as it is likely to cause uncertainty and lack of clarity for taxpayers which in turn will lead to extensive litigation. However, considering the provisions of GAAR which are very broad, more litigation is foreseeable. Further, at a time when foreign investors are willing to invest in India, such provision could act as a hindrance which in turn will impact the economy adversely.

Dr. Sutanuka Dev Roy, Associate Professor, ASCI has touched upon the implications of Union Budget on Economy. In the financial year 2011-12, fiscal deficit has been estimated to be 5.9% of GDP. Fiscal consolidation is required, for which expenditure reforms, subsidies, tax reforms and disinvestment policy need to be streamlined. The most important among them has to be expenditure on subsidies given that the government has exceeded the planned budget subsidy expenditure by Rs. 100,000 crores this financial year.

Sri S. Thirumalai, Sr. Advisor, Deloitte Touche Tohmatsu India Pvt. Ltd., has focus on Indirect Taxes amendments i.e., Service tax net widened to all services barring on the negative list. The summary of the indirect taxes amendments is Common registration and return forms for Excise and Service Tax, Proposal for harmonization through introduction of common tax code for Service Tax and Excise, GST Network to be operational from August 2012.