India-Australia bilateral trade 40 Billion US$ by 2015 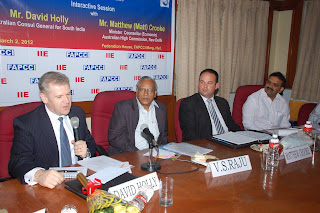 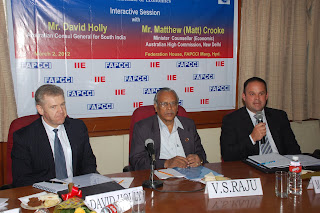 Mr. David Holly, Australian Consul General to South India said that the growing of India and Australia bilateral partnership has doubled the from AUD 8 billion 10 2005 to AUD 22 billion in 2011, with trade expected to double again to US$ 40 billion by 2015. And this partnership launched CECA negotiations, which will have its third round next month. It is the growing strength of our bilateral investment partnership that has made Australia the third largest revenue source for India’s IT companies, many of which are located in this great State of Andhra Pradesh. Resources investment from Andhra has also been significant, including from companies like NMDC and GVK.

And it is the growing strength of our bilateral education partnership that has resulted in Australia’s Union education minister to visit South India in August last year after establishing with Union Minister for Human Resource Development, Kapil Sibal, the Australia – India Educational council. Working on the delivery of vocational education in India.